The Embryo of FineFlow from Fine Flix Films on Vimeo.


For historical reference.
NOT FOR SALE.
For your viewing pleasure only.
Produced by Takuji Masuda and Super X Media.
"Planting the seed"..."Within the seed, there usually is a store of nutrients for the seedling that will grow from the embryo(...of FineFlow).
From the people who inspired Thomas Cambell's* loggin movie "the Seedling" and its overflow: Alex Knost, Tyler Warren, Robin Kegel, Belinda Baggs, and Kassia Meador among others.
*(Thomas Campbell quote from New Millennium Press magazine volume two spring 2000 page 50.) "i would say, in some respect, within that group of kids, the main people that really influenced everyone and started surfing like that would be Matt (Howard) and Brittany (Quinn), they were the first ones. I am sure Joel rode some heavier boards sometimes but he was pretty much high performance. They had been riding logs for ten years or so, not saying that they are the first ones, but when they first met Jimmy Gamboa he was a 13 year old kid surfing malibu on a short board, then he started riding tri fin longboards and now he's like pretty much the premier log rider that there is besides Joel".
*(Thomas Campbell quote from Australian Longboarding Magazine edition 10, 2000 page 57.)
"I would say that of all the people in "the Seedling" that are the post-originators of that movement those two (Mateo & Brittany) are the most important."
(The Surfer's Journal volume 7, no. 4 winter 1998 page 123)
"Home Grown with Soul"
This little opus is a semi-underground project and the way the whole thing came together smacks of what's right about surf media in these days of increased access and creativity. I'll let Matt explain the process, "Although we (Brittany and myself) have made 3 super 8 animated shorts... this was our first attempt at a longboard film for the masses.
"The plan was to document the longboard surfing of a few riders on 9'6" and over, single fin logs, and how these riders make up a vital part of their overall surfing community. Mixed in with the surfing would be a glimpse into the lifestyles we lead, also a look at what else we do besides surf.
"In early 1997, armed with a Cannon 1218, 814, L1, and a Eumig Nautica, we began shooting Tyler Hatzikian in El Segundo building our two 10' logs...later taking said boards on surfari south of San Ysidro to secret sand point solitude. Before that though, we shot Joel in San Diego and in the water at San O. Finally, we shot spring malibu focusing on Josh, Jimmy, and friends, adding in animation and later a then-and-now on Herbie Fletcher. The project took 4 months from start to finish."
("Combine" book by Super X Media circa 2002 page 262-267)
text by August West/photography by Art Brewer and Bill Parr
"Soulmates Seimpre"
Much time has passed since Matt and Brittany began to influence the new young generation of single fin surfers. Before being published, featured in movies or written about, they had already established a unique yet viable quixotic lifestyle in which their lives began to mimic their art.
Being born into a surfing family helped. In 1977 Matt Howard stood up on his father's personally shaped purple pintail. Later at 14 years old he acquired a Jacobs/Donald Takayama step deck accelerating his zest to be smooth and stylish like his pop, as well as Pinky, Whitey, Herbie, the Tracys and Roach, influencial figures from San Onofre/ Dana Point area. At 16 Matt meets Brittany Quinn and their relationship begins. Together they finish school and travel extensively through Mexico archiving themselves with an archaic Cannon super 8 movie camera. Along the way both graduated UCLA, magna cum laude in Spanish Literature. More adventures seeking secluded perfect peeling point breaks in France, Portugal, Spain, Holland and Morocco would follow. Later they teach themselves the art of animation.
In the winter of 1997 the opportunity occurred to put together a film/animation project encapsulating their carefree way of life. This project focused on riding and building hand crafted surfboards by shaper, Tyler Hatzikian of El Segundo, the places visited, the custom clothes created and worn along with the manner and style in which the waves were ridden. Add in some hand drawn animation and "The Embryo of Fine Flow" comes out as a very rare and home grown piece. "Let it Flow" and "Even Flow Euphoria" would follow, continuing the story line and trilogy completed in February 1999.
Since then Mateo Howard and Brittany Quinn have maintained their way of life while at the same time evolving and perfecting their art skills. Surfing their eclectic collection of boards. Brittany stitches away on her sacred Singer, while Matt sketches splendid surf sequences. Their importance is still recognized and acknowledged today. Please appreciate these heirs to the heydays. Today they reside over looking Malibu point.
Special thanks to Takuji Masuda.
Etiquetas: longboard Peliculas
Reacciones:
radesega
Enfermo del surf y el shape. Suelo saltar olas por Valencia. 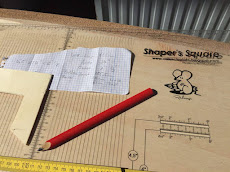